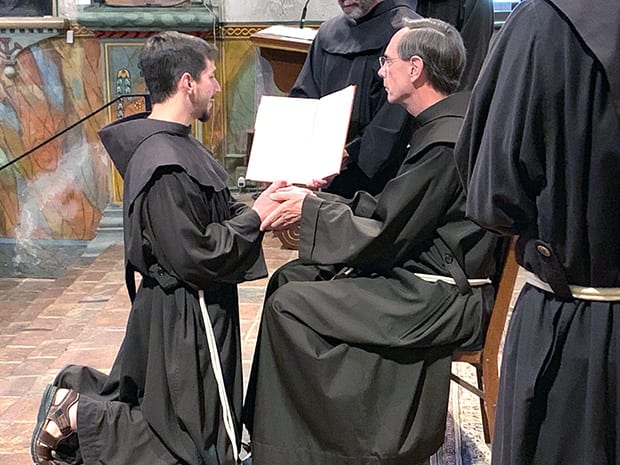 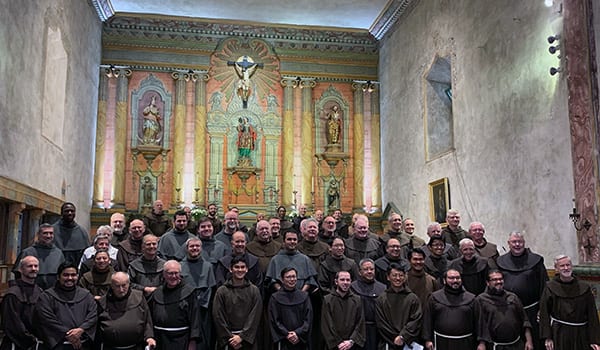 The assembled OFM, Capuchin, and Conventual Franciscan friars who came together for the first vows of the OFM novices in Old Mission Santa Barbara. (Photo courtesy of the author)

The vows ceremony was attended by a number of friars, including Capuchin and Conventual Franciscan friars and novices who journeyed from their nearby novitiates to witness the ceremony, along with members of the parish church at the Mission.

Friars from four U.S. provinces professed their vows to live St. Francis of Assisi’s Rule of the Order of Friars Minor. Those friars were:

After each student friar made his vows, he was presented a new cord for his habit. Instead of the simple cord with no knots worn by the novices, the newly-professed friar was dressed with a cord that had the three knots representing the three vows of poverty, chastity, and obedience.

The ten men then signed the official register of their respective province. Also, signing were the provincial minister and the witnesses from the province. 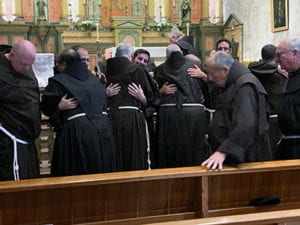 The assembled friars offer congratulations on their new brothers. (Photo courtesy of the author)

After all ten had made their profession of vows, the new brothers received the congratulations of the provincial ministers, the novitiate formation team, and then from all the assembled friars, including the Conventual and Capuchin novices who had shared many novitiate experiences with the newly-professed.

Unlike the Order of Friars Minor, the Conventual and Capuchin novices do not make their first profession of vows together, but will instead each return to his home province to make his vows there.

Following the vows ceremony, a lively reception was held in the novitiate dining room for everyone attending.

The newly-professed friars will now journey to spend time in their home provinces before starting studies in the fall either at Catholic Theological Union in Chicago or at the Franciscan School of Theology at the University of San Diego. 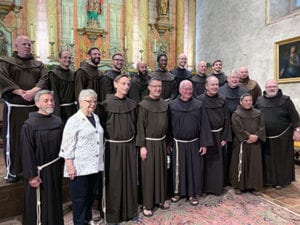 The novitiate formation team, the provincials, and the newly professed friars. (Photo courtesy of the author)

The novitiate is the second step of Franciscan formation. During the first year of formation as a postulant, the man lives, prays, and ministers with friars, but — although associated with the order — he is not yet a friar. The second step is when a man is received as a novice. For a year-and-a-day, he studies the rule and constitutions he will vow to live, develops his spirituality and knowledge of the order. At the end of the novitiate year, the man vows to live in poverty, chastity, and obedience for one year. Since these vows expire after one year, they are referred to as “simple vows.”

At the end of each year, if both the man and the province are in agreement, the vows are renewed, again for a period of one year. After the normal four years in simple vows, again with everyone in agreement, the friar makes “solemn vows,” that is, he vows to live in poverty, chastity, and obedience for the remainder of his life.

United States Subconference of the English-speaking Conference of the Order of Friars Minor. Privacy Policy This work is licensed under a Creative Commons Attribution-NonCommercial-ShareAlike 4.0 International License.